What we’re up against… 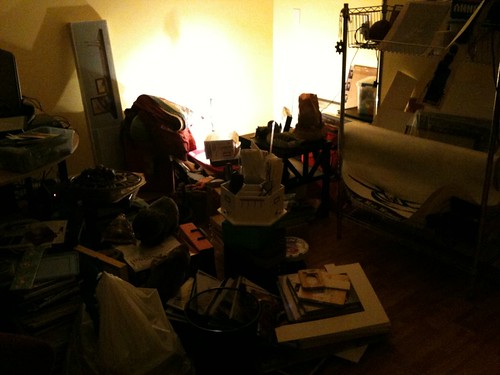 Kevin's iPhone photo of part of my studio stuff. And by "part" I mean "Maybe a quarter."

Kevin’s got a Flickr set detailing some of the renovation. The photos aren’t great quality, since they’re mostly taken with an iPhone at night in a dark room, but you get the gist. (Also, I’m not that fat. It’s the painter-pants, I swear!) We’ll be taking some better shots once everything is actually set up, but at the moment, I’m still in boxes and have hung no art, which is, of course, a horrifying state of affairs that cannot be allowed to stand.

But I did get my corner station put in. I was originally hoping to get some kitchen counters cut to fit–I confess, I saw a spectacular home studio using kitchen countertops and wire baskets underneath in a magazine and was seized with studio lust–but neither Lowes nor Home Depot will cut them, and the price was anyway prohibitive, even given a number of well meaning friends with table saws, so I’ve got some melamine sheets laid over Sterilite drawers, which should work well enough for the Artist Who Has Already Blown Quite A Lot Of Her Last Advance On These Shenanigans, Thank You.

I spent last night until about 1 AM assembling cheap bookcases, one of my acknowledged skills, while Kevin assembled a “craft supply station” from A.C.Moore that, despite having been stashed near the scrapbooking aisle, is gonna be AWESOME for holding my various ink bottles. Unfortunately, this object and its companion had more small fitted parts than the inside of a bionic chinchilla, and as soon as Kevin started reciting the directions–”Attach LL to CC and slot into J”–and I pulled out a random part and found that the labeling went up to Q, I screamed “I NEED AN ADULT!” and fled to the bookcases and the comfort of my power screwdriver.

Now it is time to shower and put on pants. The sooner I get all this stuff organized, culled, and put away, the sooner I can pull the bins out of the bedroom that actually have the art supplies in them, not just the detritus of studio life.

Originally published at Tea with the Squash God. You can comment here or there.