That’s right, boys and girls–the Stoffice is DONE. (Except for that one box. Which I’m going to shove in the crawlspace. Yes. Done. We’ll go with done. Yes.)

And as promised, there are photos! Which makes me happy, because in a few months, I’ll be able to remember back when it looked like this. (Illusions. I do not have them.) 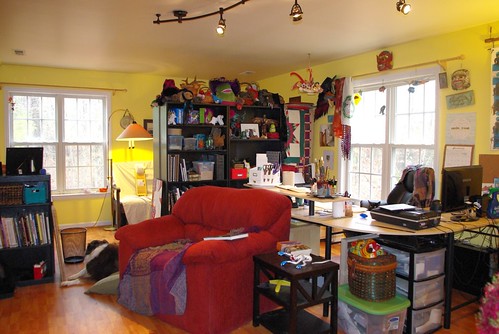 My main workspace. The computer chair with the jacket in it is where I spend most of my working time, but the big red chair is where I read and take occasional naps. Also, track lighting! Dude! (There will be another set over the Kevin Cave, but we’re waiting on a track connector to come in.) 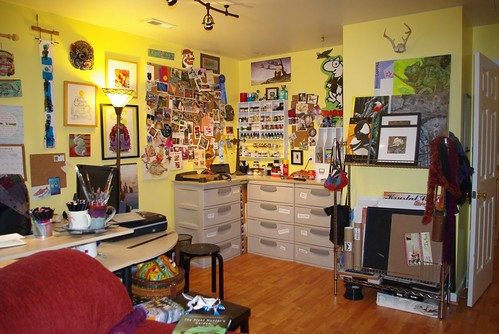 My corner workspace. Everything is so organized and neat and…wow, that never happens.  I’m actually kinda looking forward to the next few months, when the stuff I actually USE will find its way to my desktop workspace–it’ll be interesting to see what turns out to be the really genuinely useful objects in my studio. (So far that pilgrimage has been made by Titanium White and Titan Buff liquid acrylic, clear gesso, my big tub of Matte Super Heavy Gel, the x-acto knife and the needle tool.)

I admit, I offer these photos with a certain trepidation–please note that you do NOT need this kind of set-up to make art, I have been making a living making art for not-quite-a-decade, and I have had this awesome studio for about three days.  Prior to that, I was jammed into a spare bedroom where I could only get to my computer by turning sideways and hitching my hip over some bins, prior to that I had a sort of dining-nook in my apartment, prior to that was a succession of spare bedrooms, and prior to that was the bit with the kneeling on the floor with the canvas propped on the couch.  This is a really cool space, but it is not in any way required to make art. 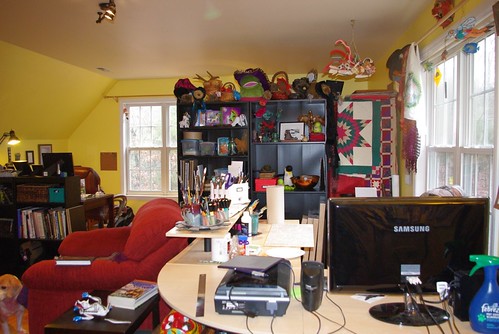 Another view of the workspace. You can see the Kevin Cave over in the far left. (He wanted to be blocked in with bookcases! He said the openness was making him agoraphobic! I OFFERED!)

Yes, that is the Biting Pear wearing a giant pimp hat. 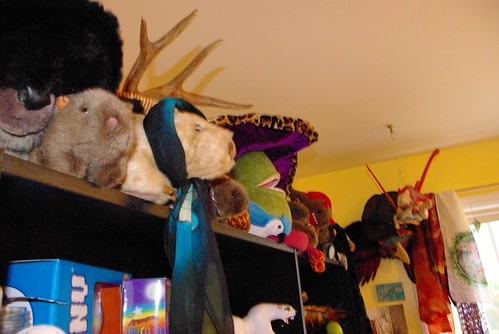 The Geekosphere has been relocated to the tops of the bookcases. Time to feline demolitions…3…2…1… 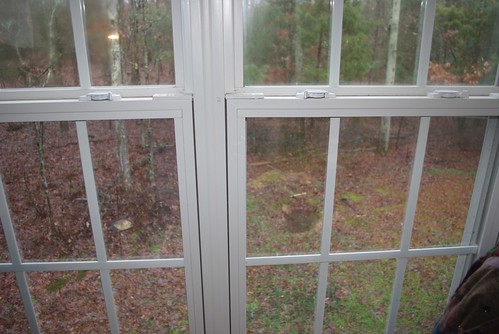 My only real regret in this move is that I have lost my snazzy view of the garden. Now I have to figure out what to do with this space. There’s a short hillside which I will probably hem in with railroad ties, (or whatever our modern organic creosote-free landscaping equivalent is) dump some dirt on, and start slapping in some of my favorite go-to plants. (Texas sage, mountain mint, some false indigo, some hyssop…) The wooded bits will rapidly go full shade, but I’m going to try some Virginia bluebells there as part of my plant-more-spring-ephemera-damnit campaign, and this spring, motivated by the fact that it is STARING AT ME, I will get the pond completely dug, which should enhance the view immensely.

The area below the low hillside is pretty  soggy, much more so than my beds out front, so that’ll be the big challenge. I can do swamp mallow and swamp milkweed and probably even spicebush, but I’ll also need some low plants that like wet feet. 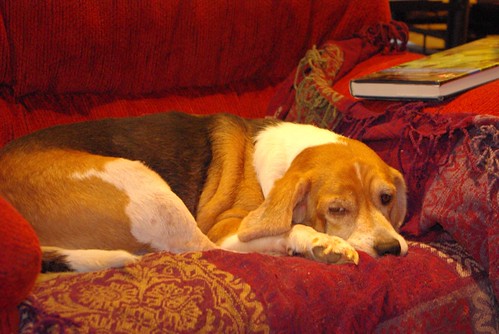 Gir the beagle is very sad that I keep kicking him out of the chair, which is so obviously made for beagles.

So that’s my chunk of the new Stoffice. You can see the Kevin side, with notes, at his Flickr set (and he kindly took all these photos!)

Originally published at Tea with the Squash God. You can comment here or there.